Focus on the Maritime Sector During the Sea Days

The 5th edition of the "Journées de la mer" (Sea Days),  organized by the maritime cluster of New Caledonia, took place on July 7 and 8. This annual event brought together 175 actors from the maritime world, from the private and public sectors. The government services were well represented.

Following the 2016 General Conference on the Sea, initiated by the Maritime Cluster of New Caledonia (CMNC), with the support of the government, it was decided to create an annual event around major maritime issues. "To keep the fire under the pot!", says Lionel Loubersac, co-manager of the cluster. The 5th edition of the "Journées de la mer" has again kept its promises by enabling  actors, professionals and institutions, to "present the progress of current actions and exchange, through round tables, in order to bring out new projects and avenues of reflection," adds the president of the CMNC, Philippe Darrason. The meeting began with presentations illustrating the diversity of topics related to the sea. For the government, it was an opportunity to give a progress report on the management of uses and conservation within the Coral Sea Natural Park. And to recall that "the exploitation of resources, such as fishing, and the protection of the environment should not be opposed," said Manuel Ducrocq, head of the Coral Sea Natural Park and Fisheries Department. It is a concept that is part of New Caledonian history, and the two notions are associated in the organic law. 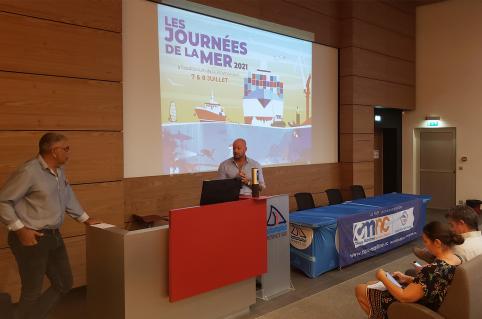 Christopher Gygès, Minister in the 16th government participated in the opening of the "Journées de la Mer"

Relay of the institutions

Four themes were addressed in round table discussions: New Caledonia's international maritime relations, seafood products from the perspective of food self-sufficiency, the shark crisis and the future of domestic shipping. "These issues are linked to current events or have become a priority since the health crisis," says Emma Colombin, co-manager of the cluster. Government services and departments took part in each of these workshops in order to bring their expertise to the professionals and other communities present. Thierry Canteri, director of the Maritime Affairs specifies: "Our agents were able to give technical and regulatory information and to provide details on the stakes relative to the shark crisis or to the internal maritime transport. We have also made the point on the reforms in progress. The participants appreciated the opportunity to exchange with interlocutors involved in government decisions. Manuel Ducrocq confirms: "These workshops are an opportunity to communicate on the actions taken by the government, especially in terms of support for professionals in the fisheries sector for the development of their products. 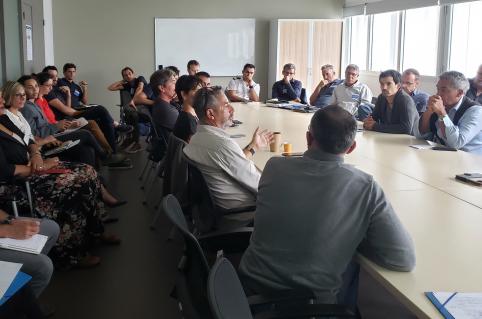 The workshop on the management of the shark crisis

During the round table on international maritime relations, many issues were discussed such as the real place of New Caledonia in its regional and international context or a review of its integration strategy. François Behue, Head of the Regional Cooperation and External Relations Department, spoke about maritime diplomacy: "In terms of maritime trade relations, New Caledonia is in a position to make greater use of its economic activities and its marine heritage, and opening up to its regional environment can only be positive. The maritime sector is one of the development priorities for the vast majority of our neighbors. Blue diplomacy is at the heart of the action carried out by regional organizations, but also the European Union, which remains one of the main partners in Oceania.

In a day and a half of work, participants were able to sweep up a large number of topics. "The Journées de la mer have become a must to advance projects and are a source of information, especially for young professionals who are beginning to get involved in the maritime sector," said the representatives of the CMNC, whose mission is to encourage people to pursue careers related to the sea.

The Blue Book is one of the issues that the New Caledonian maritime cluster intends to bring to the 17th government's attention. Produced by the members of the CMNC with the contribution of the institutions, this document includes a roadmap for a New Caledonian maritime strategy articulated around six axes. First of all, it calls for the establishment of a new governance of the sea based on a strategic maritime committee. "We need to bring together public decision-makers and private actors to develop a real maritime policy. The creation of this committee is the prerequisite for any operational action," insists Philippe Darrason, the president of the cluster. Another project supported by the CMNC is the creation of a center of maritime excellence with infrastructures in Port Numbo and other sites. This large-scale project for maritime economic development is well underway, with initial funding of 400 million francs under the France/New Caledonia development contracts.