France-Oceania Summit with the President of the French Republic

The 5th France-Oceania Summit was held on Monday 19 July by videoconference in the presence of the President of the French Republic, Emmanuel Macron, and all the leaders of the Pacific Islands Forum and regional organizations.

During this high-level political dialogue, the President of the 17th New Caledonian government, Louis Mapou, recalled the objective of strengthening the country's regional integration, as provided for in the Nouméa Accord.

More specifically, he insisted on the need "to preserve the major marine balances, both for the exploitation of fisheries and for the exploitation of underwater resources for which a moratorium seems to be necessary. President Mapou also stressed the importance of the Vemööre Declaration, adopted in November 2020 in Noumea. This founding charter sets the framework for the protection of biodiversity in Oceania and reaffirms the importance of the link between the ocean and the climate, but also and above all between traditional knowledge and science.

The current health crisis and its impact on Pacific  countries was the main concern of the summit and was discussed at length by participants. The political representatives present agreed in particular on the need for sustainable financing for a green, resilient, inclusive and sustainable recovery, aligned with the 2030 Agenda and the Paris Agreement. For his part, the President of the French Republic reiterated France's commitment to supply the Pacific countries with vaccine doses.

Emmanuel Macron also listed the future operations planned to strengthen the security of the Indo-Pacific zone. Among them, the implementation of a French maritime network in the South Pacific, linking the French territories in the area with their partners (Australia, New Zealand, United States). The aim of this network would be to "structure the training and education offering, to promote the exchange of maritime information, and to strengthen surveillance operations in the exclusive economic zones of the Pacific".

Another action planned, in partnership with the member countries of the FRANZ agreement (Australia and New Zealand): an emergency aid initiative concerning regional matters will be deepened on the model of the operation conducted in 2019 against the measles epidemic in Samoa. Finally, the President of the French Republic also announced the doubling of France's contribution to the Pacific Fund (from 1.4 to 3 million euros, or 360 million francs), the extension of AFD's mandate to projects contributing to the mitigation of the effects of climate change, as well as French support to projects in the region. 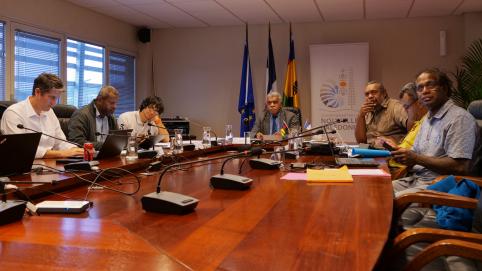 A joint declaration was adopted following the 5th France-Oceania Summit (available to download below).

The main themes of this France-Oceania summit, the fight against climate change and the preservation of biodiversity will also be developed thanks to a broader support of the Pacific States to the initiatives in progress, and to new contributions:

one million euros for the International Solar Alliance project ;

five million for the Kiwa initiative;